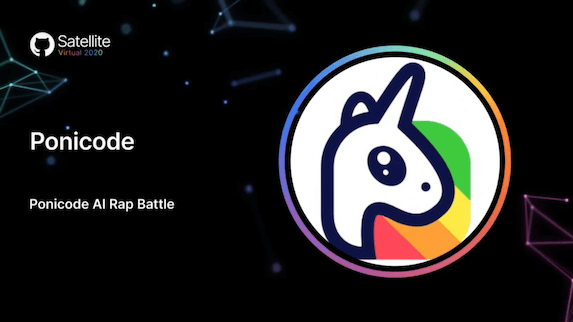 We built an AI-driven rap generator to go up against a live human rapper at the Ponicode AI Rap battle at Github Satellite on May 6, 2020. Watch the battle here, and scroll down further to see the lyrics generated by the Ponybot.

Round 1: Man v Machine (and all things tech)

We’re going to be around
So, take what you found
I’m the future with a bunch of weight every time I log in
When the walls fall around you is when you will know when to begin

I have never seen you but I know you’re not the only one messing
But I want to be loved by
Digital witnesses, what’s the point of doing anything?
In seventy seven and sixty nine, revolution was in the air and a finger to the sky

I call you, you don’t call me just to tell me
People giving up just to scream your name
People lining up just to give the blame
Air conditioned TV land, twenty grand walk to the summit at night, you and I are meant to be

I hit you with a hard hand, you know that I leave it alone
You’re so clever with all you precede
I stare at my phone
And the voice said: This is the inspiration I need

Yoga pants, sweatshirt on the globe I’d rather be
Strong words in the dark, you were born to sing the blues
Now it’s time to lose
Strangers waitin’, up and run and I had to go steady

Put in them hours, I’mma make it right so badly that I always got it wrong
Living in a ghost machine
Soon there won’t be long
And oh my little quarantine?

Yoga pants, sweatshirt on the globe I’d rather be
And it’s a long hard road until I can keep on going – all the world as we know
And i get locked up, they won’t let me out, no.
If you don’t wanna see Ladbroke Grove empty

I just wanted to get along
And now we are awake and it seems too much for me, it always came too strong
You symbiotic, patriotic, slam fight, bright light
You may say that I’m a wild light blinding bright

He starts to make it better together, we make a wicked pasta plate
It’s times like these that we activate
Yoga pants, sweatshirt on the globe I’d rather be
Strangers waitin’, up and run and I had to go steady

Your monologue’s getting tired, now it’s time to cut the dead weight
You can’t even invent your way out of a pastry bag, understand me?
Giuseppes when I step in this place and I’m still too great
Wait till they get a taste of what this battle would be

I run the streets really?
Your track sounds like a little piece of celery
Contact was blown by Benzetta in The Source to cause a little controversy
I changed the weather in the whole country but they ain’t caught nobody

Or talk about the fact you were insecure
Whether things are good they’re great and it’s like I’m running against a cheesecake!
Is I don’t see her
Way too much quiche, what else does it take

I’ll take Maxwell’s super hammer, and give you something to smile about
They don’t want to see me on the streets alone for a sec
Look at you try to pull the camera out?
Sean Kingston got robbed and now you missed that check

Yeah, a breath of spring
That’s what I call wannabes
Counting money, you know how we living
Herzog and Adidas, man, you know I’m like the Dream Team touring overseas

Now you’re going to be successful, you have to rain on my parade?
Nah this is the last time your music got anybody made?
Wiley, lay off the fries and egg yolk
You can’t do fast food half as good as Biggie and Pac joke

By the way we are a Javascript unit testing tool based on AI and available for free !

Discover our selection papers that we think are the most impactful in our field and who consequently will shape the software industry for the coming year(s).