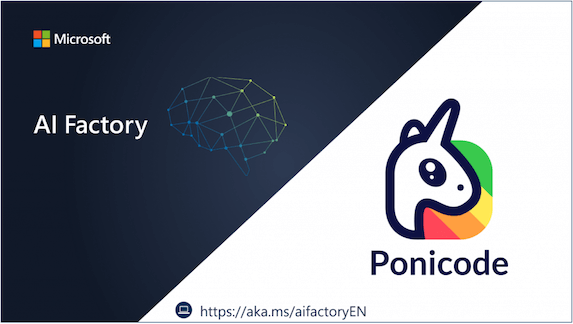 Are you confused between Ponicode and CircleCI? It’s not you, it’s us. Ponicode was acquired by CircleCI as of March 2022. The content and material published prior to this date remains under Ponicode’s name. When in doubt: Ponicode = CircleCI

Paris, May 28, 2020 – Ponicode, a startup created in June 2019 using AI to generate unit tests in a few clicks to facilitate the daily life of developers, joins the Microsoft AI Factory community.

Microsoft AI Factory: a community contributing to the emergence of French AI champions

Microsoft AI Factory brings together a community of leading artificial intelligence startups with the ambition to help them grow and develop. The selected startups benefit from Microsoft’s unique partnership approach, which includes technical, marketing and business partnerships:

To allow developers to focus on what they like most – coding – Ponicode has designed AI that understands code and generates unit tests for developers. Indeed, unit tests, an essential tool to ensure code quality, are sometimes neglected due to lack of time, leading to bugs, usability problems, and more. Ponicode puts AI at the service of developers by offering low-code unit testing that facilitates their daily life, allowing them to focus on creating great programs.

Ponicode is the second company of Patrick Joubert to join the Microsoft AI Factory program. This time, he has joined forces with three partners for this new adventure: Benedetta Dal Canton, Simon Guilliams and Edmond Aouad. Before imagining this new technological innovation project, Patrick Joubert created in 2015 Recast.AI, a collaborative conversational platform for developers to create chatbots. As part of Microsoft AI Factory, Recast.AI experienced an acceleration in its growth dynamic and was the first startup to leave the Factory following its acquisition by SAP in January 2018.

“We are very proud to join the AI Factory and to be able to count on Microsoft’s support,” says Patrick Joubert, CEO and co-founder of Ponicode. “This marks a major step in our development. The AI Factory will enable us to accelerate our innovation efforts by benefiting from the strength of Microsoft’s ecosystem in France and internationally, as well as its expertise in fundamental research on artificial intelligence. It is a fantastic opportunity to join this program that has already produced AI champions”.

Ponicode is a startup created in June 2019 and intended to facilitate the daily life of developers. The startup has developed a low-code solution based on AI to generate unit tests in JavaScript in a few clicks in VSCode. Ponicode’s ambition is to help developers to produce quality code, faster, and especially to focus on what they love most: coding. Follow Ponicode on Twitter and LinkedIn

As a leader in productivity platforms and services, Microsoft empowers individuals and organisations to achieve their ambitions in a world based on the cloud and mobility. At the heart of the French digital ecosystem for more than 30 years, Microsoft France, chaired by Carlo Purassanta since September 2017, brings together more than 1,600 employees at its Issy-les-Moulineaux campus, under the motto of openness, creativity and collaboration. With a network of more than 10,500 business and technology partners, public sector players, researchers and start-ups, Microsoft France is committed to equal opportunity and digital education alongside associations throughout the country.